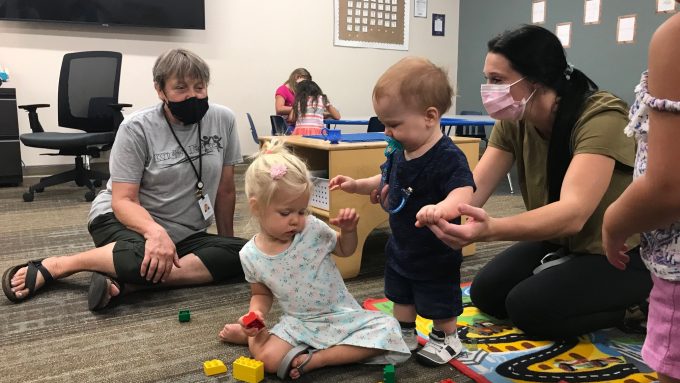 People caring for people. That is what happens inside the walls of River’s Edge Hospital in St. Peter.

When the COVID-19 pandemic started and schools and daycares started closing, the administration at River’s Edge knew they needed to take care of their people.
Jackie Kimmet, Chief Human Resources Officer at River’s Edge Hospital said she was concerned for staff and where they would bring their children, especially if both parents were considered essential employees.
“I thought, ‘how can we help relieve the anxiety all our employees were experiencing,’” Kimmet said.

The idea of a daycare at River’s Edge Hospital is not a new one. Kimmet, who has worked at the hospital for 17 years, said she heard rumors that what is now Live Well Fitness Center had been planned to be a daycare.
It was important to keep staff working and at work so in May 2020, hospital administration took on the task of opening a daycare for its employees. COVID grant dollars allowed the daycare to be free for employees and be available 24 hours a day, 7 days a week.

To help with this task, River’s Edge Hospital brought in Melony Ramsey, a St. Peter area resident who has years of experience in Early Childhood Education. Through the past 15 months, Ramsey and her staff have created a center parents and kids are thankful for.

Emily Travaille, Health Unit Coordinator in the Surgical Services department said at the start of the pandemic she was panicked because she thought she’d have to be off of work to stay home with her daughter, Callee.
“The daycare is a life-saver,” Emily said. I could still work and Callee could come here. It was a relief knowing Callee would have stability and structure.”
When Callee learned she was going to a daycare at her mom’s work she said she thought it would be crowded with little kids. But when she got here she said, “Oh my gosh it was so calm!”

On July 28, the River’s Edge Hospital Commission voted unanimously to make the daycare at River’s Edge Hospital permanent. When the votes were done being cast, it was obvious that Ramsey was excited.
“It takes me a while to process, but I was watching them as each voted. And they had no idea that they were making a life-changing decision for everybody,” she said.
When the daycare started in 2020 it was branded as Kids’ Edge. Now that it is permanent, a second license has been obtained in order to have a specialized group for infants and toddlers. That group is branded LiL’ Edge.
In Kids’ Edge, the age group will be pre-school age up to 11 years old. Lil’ Edge will have infants and toddlers, for a grand total of 17 kids in the daycare. Ramsey explained that this set up will allow for like-age groups to be together and to have an age specific curriculum.

The families who have been using the daycare are happy now that the program is a permanent part of River’s Edge Hospital. “Now they know,” Kimmet said. “Some who didn’t bring their kids here was out of fear of losing a spot at the daycare they were using.”
Erin Quast, Physical Therapy Assistant, had wanted to bring her son, Evan to Kids’ Edge when it opened last May but was hesitant because of the temporary status of the daycare. When the permanent status was announced, Erin enrolled Evan.
“I have more comfort having him here,” Erin said. Evan has had some health issues in the past and Erin feels more comfortable having her son at River’s Edge versus 30 miles away.
“So far we’re happy,” she said. “The teachers are wonderful, thoughtful and kind.”

“She loves it,” Emily said about Callee and coming to Kids’ Edge. The teachers, Emily said were amazing during COVID. She said that Callee is comfortable, and it feels like a second home to her.
“And she loves that she can come to work with mom.” 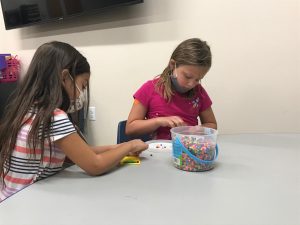 Odessa and Callee concentrate on their fusion beads project.

“It feels good to walk in to work with mom. I get to spend more time with her,” she said.

Currently, only River’s Edge employees are allowed to utilize the daycare center services. Ramsey said it is the goal to be able to open enrollment to other organizations on the healthcare campus.
River’s Edge employees who want to learn more about enrollment at Kids’ Edge or Lil’ Edge should contact Melony Ramsey at mramsey@rehc.org to set up a time meet in person.