OrthoEdge Total Joint Replacement: “Don’t wait. Don’t think its going to get better because it doesn’t. It gets worse.” 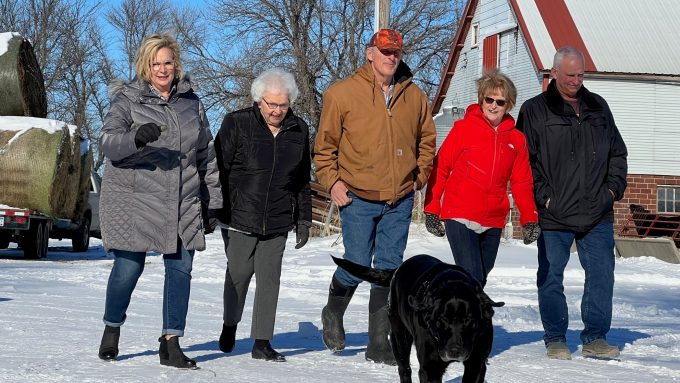 It all started with a Christmas tree.

Jim Billmeier of Morgan, MN, recalled he was looking to cut a Christmas tree when he stepped in a spade hole and injured his knee. “I called OFC to get me in with who could see me the fastest. That started the relationship with Dr. Botker.”

The story doesn’t end there.  Most of Jim’s family has their own story to tell. Jim, along with a few of his siblings and a niece, gathered around Jim’s dining room table to share their stories.

Rosemary Kirtz, the oldest of the 10 Billmeier siblings, remembered their mother having arthritis so bad that it hurt her to walk or stand.  “We think this is where the arthritis started,” she said.

Virginia Landkammer, sister, said the hard work they did on the farm as kids and the work they all did in their adult lives contributed to all their joint issues.

“Oh, I don’t know. I think it’s the Catholic upbringing and the kneeling is what wrecked my knees,” Bruce, brother, said dryly while the others erupted with laughter.

Ann Eckberg, daughter of Rosemary, is a retired schoolteacher, said she knows her bad knees were inherited.  She said her last year of teaching was difficult because of her knee pain. She did what she could to delay joint replacement, including cortisone injections. Ann recalled the injection she had prior to her daughter’s wedding, “She had a beautiful wedding, but I was in misery.” 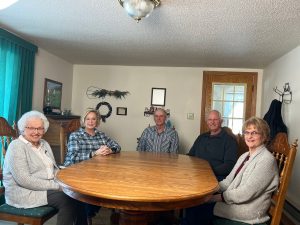 Jim started it and Rosemary, Virginia, Bruce and Ann followed.  All were cared for by Dr. Jesse Botker at The Orthopaedic & Fracture Clinic in Mankato and had surgery at River’s Edge Hospital in St. Peter through the OrthoEdge Total Joint Replacement Program.  Dr. Botker shared that he had replaced 21 joints for the Billmeier family.

Jim has had both knees replaced along with a shoulder replacement.  He’s also had four back surgeries with OFC’s Dr. Thomas Jones following a farm accident.

Rosemary had both knees replaced at the same time in 2019 at age 80 (she noted proudly).

Virginia had both knees replaced at the same time in 2018 and a procedure on her shoulder in 2020.

Bruce had both knees done at the same time in 2018, a hip replacement in August 2019 and the other hip replaced in December 2019.

Ann had both her knees replaced at the same time in 2019, just 3 months after her mother, Rosemary.

The day they sat around Jim’s table was the first time they really shared their experiences with each other.

Virginia shared that she was doing physical therapy and cortisone injections to help with her knee pain.  The retired nurse knew she had to do something more when she had a hard time taking her grandson for a walk in the stroller.

“I thought, ‘this is nuts.’ I was watching Jim’s progress and how he was getting along.  I had a few talks with Jim, and I decided to see Dr. Botker.”

Bruce, who drives a grain truck, said he was taking 12-16 ibuprofen a day to try to get through the pain.  “And not doing the things I wanted to do. Now, a bottle of Advil, I don’t know what that is anymore.”

Rosemary said when she went to see Dr. Botker, he told her both her knees were bad.  She said she was mentally prepared for her surgery because she was in so much pain.

“I thought she was a rock star,” Ann said of her mom. “She healed marvelously. Better than I did.”

Looking back at their experiences, none would change a thing, and all were a little surprised with their recoveries.

“There’s no resting,” Ann said. “You’re up and moving right away.”

Bruce agreed, “It amazed me. You get up six to seven hours later and walk to therapy!”

“It’s like the longest mile,” Virginia said with a laugh.

After the laughter settled, Ann said, “And here we are.”

“We can walk,” said Rosemary.

“And we can laugh about it,” Jim said.

No pain and better quality of life was the goal and that was achieved.  Bruce was back hauling grain four weeks after his surgery.  Jim was back doing chores and feeding cattle on his farm after five weeks. Virginia is walking with her grandchildren without stopping to rest. Rosemary walks without pain and Ann joined a gym and said they only thing that doesn’t hurt is her knees.

There is a reason the Billmeier family kept going to and referring other to the OrthoEdge program – the care and attention they received.

“There’s something about OFC and River’s Edge,” Jim said. “They both have something we are not used to in healthcare and that’s customer service.”

“It was nice going to a small-town hospital,” Bruce said.

Virginia said she was not treated as a number.

“It’s amazing what medicine has done,” Rosemary said. “I think about Mother and if she could have had some of this.”

The Billmeiers all have the same advice to people who are considering total joint replacement and it is summed up by Ann, “Don’t wait. Don’t think its going to get better because it doesn’t. It gets worse.”